There are three characters in DC Comics who are considered the seminal ones over all others. One is Superman, one is Batman and the other, Wonder Woman. Together, they are often referred to as “The Trinity”. Batman is hands down the most popular of the trio. Superman is a close second and then Wonder Woman is somewhere in third place. 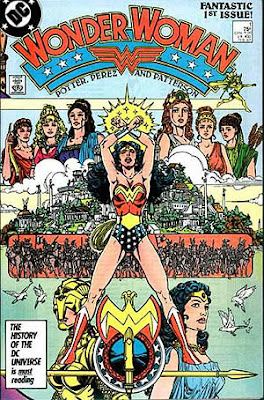 Of course taking these three characters above all the others in the DCU and casting off the rest is an insult to gems such as Green Lantern, Flash, Aquaman, Hawkman and so on. While some are difficult to keep up a regular series (Hawkman comes to mind) it implies an undeserved second tier status.
Batman’s popularity is obvious. He’s just a man with a burning vendetta–he seeks justice above else and will do anything to see it done. Superman is a being of great powers who dedicates himself to protect the lesser human among whom he dwells. He is a source of inspiration by his very existence, a reminder mankind can rise to bigger and better things.
And then there’s Wonder Woman.
What exactly the most popular female character at DC stands for exactly has always been a subject of debate. The great champion of the Amazons from the isle of Themyscira, the answer should be obvious. Princess Diana is a role model to women everywhere, a character who demonstrates aptly that a woman can stand to any challenge a man can and meet it head on.
Yet, the creator of Wonder Woman (William Moulton Marston) often depicted the character in those early years, subdued by her own Lasso of Truth, strapped helplessly to a phallic image, such as a surging missile as it rocketed through the skies. Early Justice Society stories also portrayed her in the role of the Society’s secretary. But that was then, right?
Wonder Woman enjoyed a run of popularity in the 1970s as her TV show aired and brought her national attention. Even though the show only lasted two seasons, feminists immediately embraced the character as an icon of strength and female independence.
Wonder Woman has been portrayed as a strong woman, with great strength, ferocity, beauty, grace and compassion. But she’s also been contradictorily made into everybody’s girlfriend at the same time. The Justice League cartoons had her with an interest in Batman and stories such as Kingdom Come and the more recent New 52 stories have had her as Superman’s lover.
Batman is Batman, first and foremost. He’s not defined by his relationship to Catwoman, Talia Al’Ghul or whoever. He is Batman. And sometimes he has a love interest. Contrast this against Wonder Woman, who has to be Superman’s girlfriend first and a character second. This is not to say she can’t have a love interest but why must it seem to be such an integral point to making her character interesting to modern readers? There’s now a Superman/Wonder Woman comic series–but no one make such accommodations for Batman/Catwoman, for example. Why was Wonder Woman okay as a character on her own when George Perez reinvented her in the 80s or John Byrne wrote her comic later--but not now?
Sadly, the answer would seem obvious. The current crop of comic writers is bereft of good ideas. Someone doubtlessly put as much thought into the matter as “hey! Superman’s really strong and Wonder Woman’s really strong too. We should make them boyfriend/girlfriend! That would be so cool!” 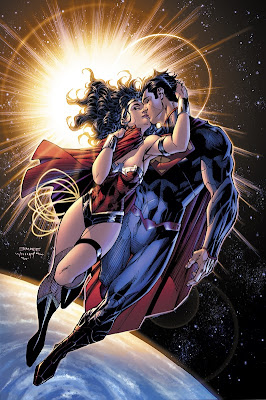 Female characters can be interesting on their own without being someone’s damsel in distress or an accessory for accessory’s sake. Look at Batgirl (any iteration), the Huntress, Ms. Marvel, Spider Woman, She Hulk... it’s all in the writing. Someone with half a brain and a granule of talent is able to carve personality and drama out of a female character. It’s the lazy hacks with very little understanding of what makes a character interesting who manage to fail time and again, resorting to making the girl a trophy for the boy character. It’s the same mentality that automatically equates “gritty” with “dramatic”.
Given the large number of female comic readers and geeks out there one would assume the comic companies would try a bit harder to pander to them, making consistently interesting female characters, regardless of the characters various slant on the world (villain, hero, saint, sinner, etc).
Let’s be honest too–a strong, intelligent female character is just as appealing to a male reader as to a female one. It’s their journey ultimately not their gender that is interesting. (Likewise, if the female character is weak willed and vacuous they can still be made interesting–in the right hands).
It seems DC Editorial should take a good long hard look at itself and realize the terrible mistake it’s making by allowing Wonder Woman to be shuffled off to be somebody’s girlfriend instead of allowing her to stand on her own. It seems like they don’t understand what to do with her when given her popularity, she should be a marquee character with several books out–like Batman and Superman. Also, get a movie or TV script that works and get it out there! Why waste such a great marketing opportunity for the character.
After all, if DC won’t take the character seriously why should anyone else?