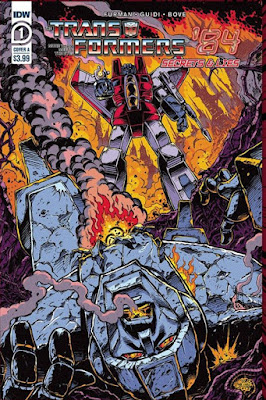 
Synopsis: In 2019, IDW released a single issue called “Transformers ‘84" that chronicled the classic Transformers back story that happened before the Ark launched into space to defend Cybertron from the asteroid field. This summer, that issue has been followed up with “Secret and Lies” which continues onward with the back story.
While the original issue followed the Autobots story from Punch’s perspective, issue #1 of “Secrets and Lies” follows the Decepticon side of the story from Counterpunch’s perspective. Shockwave and his scientists labour over “Project Dreadnought”, a plan to create world engines (called “turbines” in the story) to power Cybertron through the cosmos. Starscream and Skyfire ruminate over Megatron’s obsession with destroying Optimus Prime instead of worrying about the greater plan. Counterpunch arrives and tells Shockwave that Megatron demands his presence immediately. Megatron tells Shockwave to plan to take Stanix next so they can take the entire western hemisphere. Ratbat argues they are overstretched already but Megatron dismisses him. Later, a massive explosion sends Cybertron hurdling in the direction of the Stellae Cimeterium–a graveyard of stars. Shockwave suggests they finish the planetary turbines to correct the planet’s trajectory. Megatron says they have time to wait and gauge the Autobots response instead. Later, Ratbat speaks with Shockwave, suggesting perhaps the explosion wasn’t an accident and implies Shockwave did it intentionally, a fact he denies (although it’s obvious to the reader he was behind the incident). The Decepticons watch as the Nemesis, their new battleship designed to combat the Autobot’s Ark, stands ready to launch. The Autobots (Perceptor and the Dynobots), via Counterpunch, discover Shockwave’s treachery and go to the area in question to investigate. Skyfire, Shockwave’s associate, intercepts them there but he is taken out by Grimlock. Shockwave arrives shortly after and stops them in return (except for Perceptor, who hides and escapes his attack). Shockwave is recalled by the Seekers (Thrust, Ramjet and Dirge) to go see Megatron off on the Nemesis. Perceptor signals for backup who come and retrieve his damaged comrades...


Thoughts: This is a competently written story. Having said that, I don’t really find it all that exciting. It feels like we’re just retreading history here without really exploring anything all that interesting. Does it really matter if the Constructicons and Jetfire existed on Cybertron before we first saw them in the Marvel comic? Also, the first issue proposed that Optimus Prime purposely drew Megatron and his warriors off Cybertron to try and give whoever was left a chance to save their homeworld. It’s a different spin on things but not one that I really care for. I prefer the original way instead (a mission to save Cybertron that went wrong). Again, we’re not really covering any new ground storywise here and I don’t find it all that exciting. (After reading the two issues in question I find I’m having trouble even recalling what happened in them. Not a good sign for the future).
The artwork here is excellent. Guidi does a phenomenal job recapturing Andrew Wildman’s early TF style at its best. The comic is worth checking out for that alone, even if the story itself is not all the exciting.


Verdict: Average.
Posted by David K. Anthony at 12:30 AM No comments: 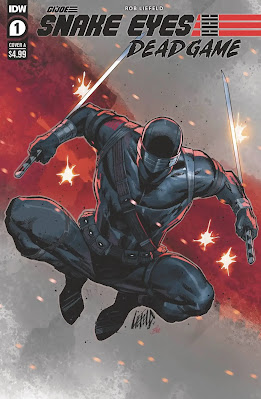 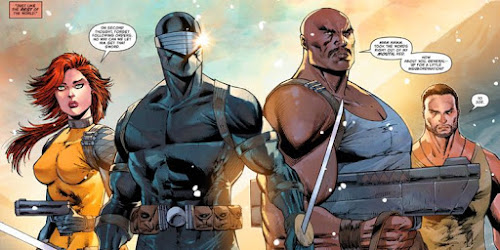 Posted by David K. Anthony at 8:38 PM No comments: