A proof-of-concept, if you will, for the George Washington: Zombie Dawn story. Perhaps more will follow at some future date. Perhaps not. Time will tell! :)

Comments are welcome, as always.

A Classic in the making?

1776. A group of men struggle and yearn to build a wondrous new republic. A place where all can be free to think and act as they please, subservient to no crown or foreign power. Where all men are brothers and all enjoy life, liberty and the pursuit of happiness.

The chosen steward of this bold utopia is a seasoned soldier and statesman named George Washington. A beacon of trust and dignity among the founding fathers and beloved by his fellow men.

Despite his valor and charisma, trouble pursues the valiant hero. Washington and his wife Martha are weathering rough seas in their own relationship. Their only child is dead, drowned in a terrible accident that neither could have foreseen but which now threatens to tear them apart.

After years of war and struggles to keep the people united, all his efforts may be for naught as his brother in-law Thomas Jefferson commits a terrible atrocity against the embattled Cherokee people when he takes their Princess, the famed Sacagawea, as his bride. Her father, Chief Crazy Horse, will not take this grievous insult to his people and plots the ultimate revenge–he will raise the dead to destroy the fledgling nation and free his people of the menace he perceives.

And just how is the rival British-affiliated nation of Canada involved in the conspiracy to destroy the United States? Washington is uncertain but he knows their Prime Minister, a terrifying man named Pierre Trudeau, is corrupt and desperately craves the power Washington himself wields.

Can Washington survive the maelstrom of dark supernatural power leveled at him? Or will his dream of a united people be torn asunder. 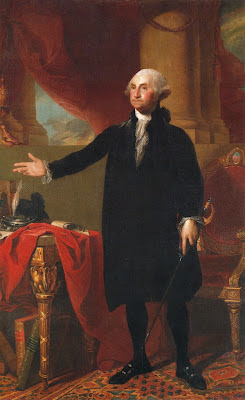 Experience the secret, not-so-true tale behind an American icon!

GEORGE WASHINGTON: ZOMBIE DAWN
Posted by David K. Anthony at 12:36 AM No comments: