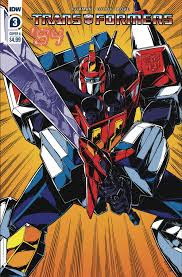 
Synopsis:  Counterpunch recalls how in Optimus Prime and Megatron's absence, Straxus swiftly worked to gain brutal dominance over the Autobots. Along with Thunderwing and Scorponok the three Decepticon warlords carve up Cybertron into their own fiefdoms. Straxus privately consults Counterpunch and asks him if he thinks will respect their pact (to stay in their own territories). He replies, no. Straxus plots to take the whole planet, then the cosmos itself! He orders Counterpunch to make Project Dreadnought happen, no matter what it takes. Punch goes to the interim Autobot leader, Ultra Magnus, and tells him they must stop Straxus' machinations. Ultra Magnus feels overwhelmed by his responsibilities but gets some reassurance from Impactor and Roadbuster. Both of them volunteer to join in on Punch's proposed "wrecking crew" to stop Straxus.
On Earth, Grimlock has apparently defeated Shockwave and is headed back toward the Ark on "autopilot", still mentally distant after his infusion of pure energon the last issue. AUNTIE, the Ark's computer is damaged and can't recognize him as a friendly so it commissions some clones of the Autobots to intercept him. Grapple, Hoist, Smokescreen, Tracks and Skids are dispatched.
Meanwhile, aboard the Nemesis, the three conehead jets (Ramjet, Thrust and Dirge) ave recovered from Shockwave's attack and decide to go down to the surface for some payback. They reach the Ark first and engage the Autobots. Grimlock passes through them unfazed so Auntie activates some Guardian robots to stop him instead.
Back on Cybertron, Star Saber fights valiantly against overwhelming odds until Deathsaurus confronts him. He orders his forces to kill the Autobot but he manages to escape. Ultra Magnus then contacts him and tells him to return to Autobase. He needs him for a critical mission. At Autobase, Impactor introduces Punch to his newly formed unit--the Wreckers!
On Earth, Grimlock makes short work of the Guardian bots and begins to regain his senses. But, just then, we discover AUNTIE has reactivated Megatron!

Thoughts:  Like with the previous two issues, a lot of this story feels boring. Like stuff we've all seen before. However, this issue veers in to slightly new territory so it's not quite as bad. I don't feel like this story is the definitive canon version of the G1 comic (I prefer the original, slightly more vague rendition). It will be interesting to see how this is all resolved next issue. As usual, the art is excellent.