(Note: This was originally posted March 26/10 obviously. I've changed blogs since then hence the date it was posted reads 2012 instead. The message is the important part though).

Tomorrow, March 27, 2010, is Earth Hour. A time where everyone can turn out their lights for an hour to symbolize their commitment to protecting Mother Earth. Why, even corporations are getting in on the act. The largest theater chain in Canada, Cineplex supports Earth Day. How? I don't know exactly. Their website doesn't elaborate. A quick check of their movie listings indicates they're still playing movies tomorrow night (which consumes power, btw). A local radio station is celebrating Earth Hour by only playing accoustic or "unplugged" songs for that hour. Nice! I mean, sure, they could've turned off their station for the hour and saved actual power but I guess this pointless display is something too. 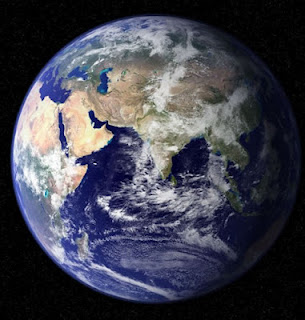 Green chic is the latest thing in society. Charging Carbon Credits for travel (even though the money doesn't really do anything to help the environment); charging five cents a plastic bag (even though plastic bags can be made to biodegrade now the stores much prefer to stick it to you in the name of being green instead). As far as business seems to be concerned, going green is an excuse to take you for more money and use your guilt over the environment to coerce you into going along with it.
I do love this planet and I do think we should be making positive strides towards trying to protect our world from self destruction. But I think we should be making real strides--instead of charging for bags, why not order only biodegradable plastic ones? Those who still want cloth bags can purchase them and feel secure about making their contribution--why must we be charged for plastic instead? And if bags are so destructive, why do North Americans insist on wasting trees and paper by using toilet paper? I don't see anyone rushing to invent a new way to use the toilet (it sounds trivial but imagine how much paper is wasted every year by being flushed away). We're all still using gasoline powered cars (although, they are slowly getting hybrids out there so the automobile industry isn't completely irresponsible about their own complicity). What about flagrant urban sprawl? Do we really need to destroy perfectly good wildlife habitat because Joe Average is too lazy to build a new house in an existing area of the city?
Symbolism isn't what it used to be. Instead of sitting in the dark for an hour like an idiot, why don't you try something useful to help conserve the environment. Get power reducing lights, more energy efficient appliances... simply turn your lights out when you're not going to be in the room for an extended period. Truly being Green is easy enough--and much more satisfying then a token day to satisfy your guilty conscience over not doing things you should be.
Posted by David K. Anthony at 4:24 PM